It was 5 O’Clock on this misty morning. Churros & Chinchón, no not the names of the dogs, but an extruded donut sausage shaped thing and a strong aniseed liqueur for breakfast. These hounds are waiting to clear the fields of Hares for farmers who grow vegetables. Sorry my fellow vegetibalists but there it is. Man’s best friend and all that.

PS: I’m not a vegetarian 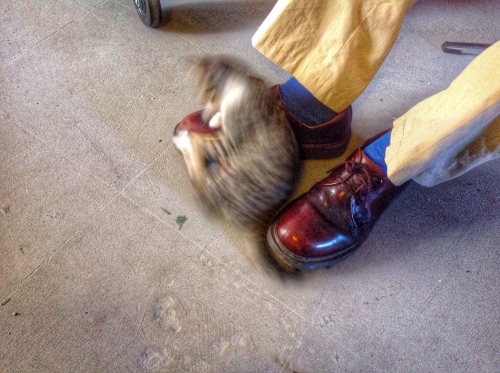 Sherlock, the cat, died this week. The same day a kitten wandered into the house. So, now that tiny cute stray thing is called Nelly.

She obviously does not give a fuck about being called Nelly, but she may eventually appreciate her noble sweet name. Nelly is helping to heal the loss of the other poor bugger. She is not not a Mantis but hey, who needs a 360 swivelling pet head? Ok, most owners of Mantisis.

The only pet that can rotate its head 360 degrees

It appeared on the Wysteria. I had not seen one before. I did a tiny bit of research and discovered that Mantises are the most popular pet in the world, over and above dogs, cats and dwarves. I left it alone, nameless. 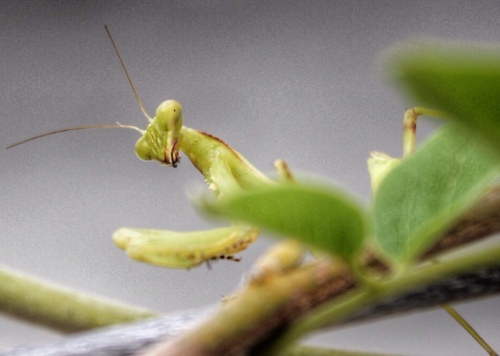 Hello cyberplaymates and the rest of you less loyal subjects.

Can you to tell me, in the name of Jesus H Christmas, what this poor bugger is? 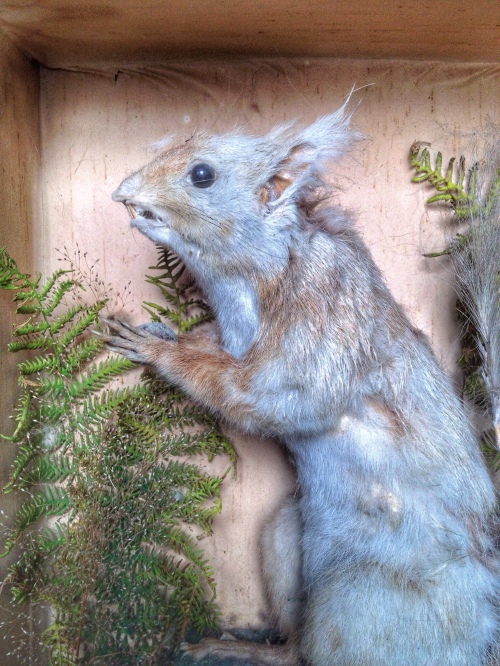 I am no Animal Rights poster boy; I've put pork scratchings in a crack pipe, but I saw this poor sod in the window of an Olde Worlde Shoppe in Rye of Eastie Sussex England … around 6 hipster years ago. It was in a glass case and quite clearly unwell. I was on a diet of highly volatile Scrumpy Drink and felt compelled to rescue this fertive fellow.

I waved a sweaty bank note with an apologetic smile to the septuagenarian three piece Bri-Nylon suit wearing proprietor. He swiftly began to wrap the thing in brown paper, the type of brown paper that informs NewYork City Police Officer's that you are an arrestable deviant Hobo person. I know this from an unfortunate experience.

As he fumbled with string, scissors and Sellotape I asked him which way up the creature might now be standing. He scratched at his arched eyebrow and pronounced “The Devil if I know. Want me to unwrap him so you can take a look?” … I declined the offer on the grounds that any more frenetic movements might cause further disturbance to the thing.

I should not have worried. I managed to step into cab and then into a lamppost dropping the parcel several times.

In the morning I saw that the ominous brown parcel had been opened, by me. The glass was miraculously unbroken. The creature however had shed almost all of it's hair. It was not a welcome accompanyment to the oncoming horrors of a hangover.

It was once a Squirrel. Then a stuffed one.

And now at last he is in a dustbin in Spain.

This Apocryphal tale is unlikely to be optioned by Disney but Srumpy enthusiasts are likely to be a tad more empathetic.

This Friday starts the celebrations of Saint George/San Jorge, the patron of the town. The occasion is everything but religious. For thrice days the booze and bulls flow as we set our pantaloons free, hail hail hail San Jorge.

What could possibly go wrong?

Last night was our last show for The Carnaval in Benalup. We finished at 2am to a tremendously enthusiastic mass of writhing bodies. I stepped outside to cool down and was greeted by a stray dog. He gave me an empty water bottle then promptly rolled over into a dead dog type position. He stayed like that. A crowd slowly gathered around him. “I didn't kill it” I said limply. Then suddenly it jumped up and startled us all. He was taking the piss, a party piece, anything fo a Tapa. 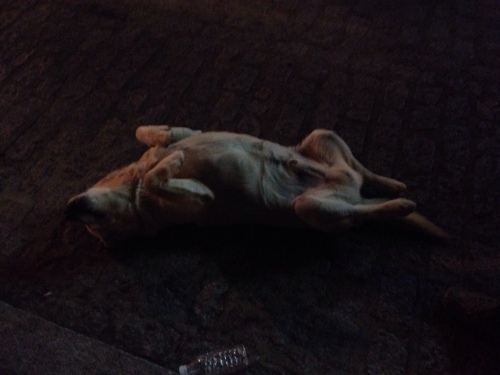 … he will find me gone” – Stewart Copeland

This morning a large box turned up. I feared the worst when I set eyes on the label. Are those the shifty judgemental eyes of a Wombat I perceive lurking in there? Was his journey disagreeable. Are they aggressive bastards? It might be dead. Good. Best.

It turned out to be a barbeque, not mammal but metal. A metal Wombat in the hand is worth two in the bush or … Something. As I don't have a hob or cooker I shall now only eat Barbeque food. I expect I shall have to move up a dress size.

I was staggering back from a heavy bout of luncheon yesterday when in the clearing appeared a unicorn, minus horn. The flora and fawna were looking pretty psychedelic at that moment in time due to my penchant for Tio Pepe Sherry mixture. The phone somehow captured it. I think this animal was sleeping as it did not budge when I shouted at it, can they die standing up? They're like mammal tables really.

A Spot The Horse competition for the soberly impaired

I have been eating out and in Andalusia Spain, a lot. It is not the greatest place on earth to be a vegetarian, I imagine that place to be devoid of a single living creature to slaughter. I'm not even considering being a vegetarian, so I don't know why I am going to keep mentioning them. 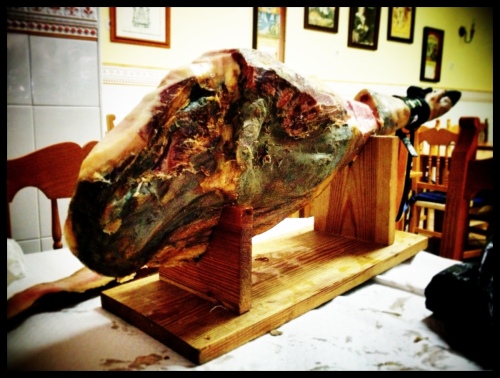 If you wish to be assured a lengthy and healthy life you should become a vegetable in Andalusia, you’d be completely unfettered here. This is a haven for those who like to kill and eat an entire pig in one sitting, and why not? There is little else better to do in the long restful hours between breakfast and dinner.

Here my friend Antonio tucks into his luncheon 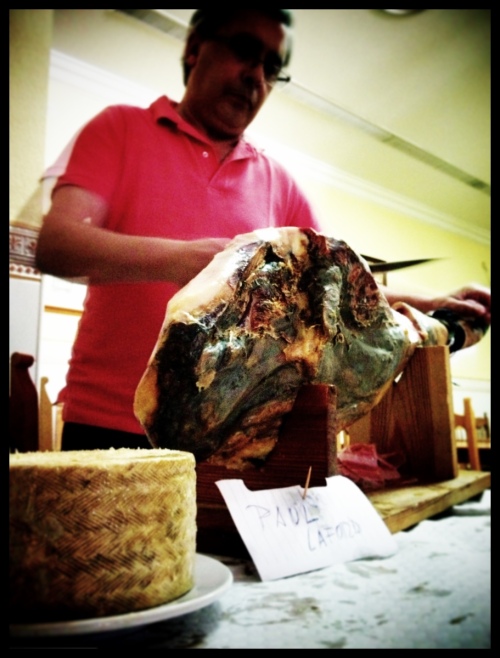 I know a chap in Barcelona, Oli Max (Renaissance Drinker) who's epically long lunches verge on Dangerous Sport, he and Dorian Crook (Comedic Vegetarian) have monikered their gastronomic marathon with the term “Extreme Lunching.”

Why drop out of an aeroplane when you can drop into a restaurant?

Andalusia produces incredibly lively cheeses, aged in olive oil that the carnivore might consider as a meat substitute. 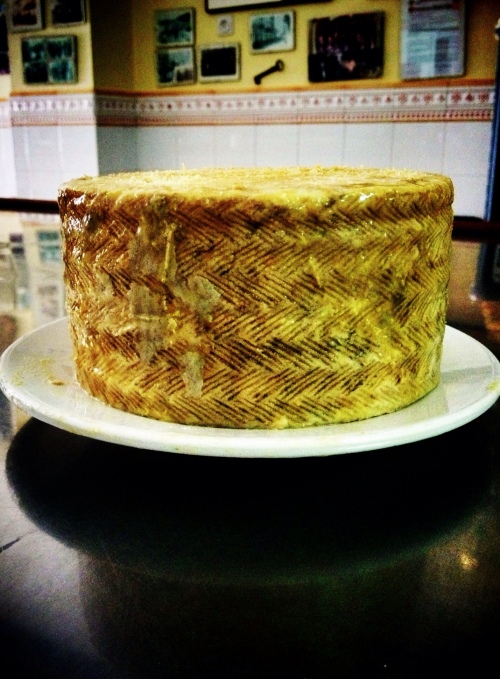 The Thing is, things can be good. People can be good … obviously, sometimes quite easily. A barman found an orphaned baby bird. So he made a house for it out of an old sherry box.

I've watched him feeding it with great tenderness for the last 2 weeks. He seems devoted to preserving the life of this scrappy little thing he calls Pepito (Whilst Pepito is the diminutive of the name Pepe, it's also the name for a meat sandwich). Pepito had just been given a bath in a saucer of water before I walked in.